Canoe safari on the river Trebižat

It is a trip lasting one day including the drive with canoes on the path way 10 kilometers long, lunch in the open air, bathing in the clear river; it is unique for the wider Mediterranean area. 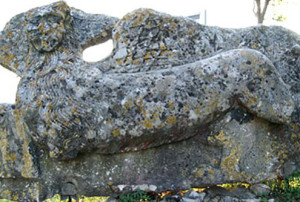 The rich archaeological site is found on the banks of the river Neretva 19 kilometers south from Medjugorje, and has retained a significant amount of the ruined walls and sculptures of the stone lioned symbol of Venetian culture. It has become a National monument. Gabela 's first records date back to year 1186 known then as Drijeva Skela. It appears as Gabela as far back as year 1399. In the year 1715 Gabela was destroyed by the Venetians and was never rebuilt to its original splendour. In more recent history it is a great subject for debate where some noted historians maintain that Gabela was in fact Troy, and Mexican historian Robert Salin Price, has sufficiently supported his theory that in fact it is Troy. After the destruction of ancient Narona developed the stronghold and trade centre in the Neretva valley in the Middle Ages, called Gabela. 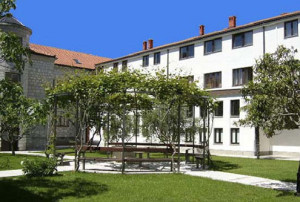 Franciscan monastery St. Ante
When the Hercegovina Franciscans built their monastery in this part of Hercegovina, Humac, in 1867 it was not only just to be their spiritual and training center but was also to be the cultural and historical record storage center and official library. It therefore became a monastery of major local and national repute for its role in the preservation of historical documents and in 1968, they added a seperate wing to store and restore their collections of handwritten books and records and has since renovated it . The arhives are vast and of immense importance to the Franciscans and the country. With their most modernly equipped cataloguing and computer system and special storage shelves, protecting the books from dampness and sunshine, work is always ongoing.

Franciscan monastery museum St. Ante
The Franciscan Monastery has the oldest museum open to the public in Bosnia and Hercegovina (1884) with exhibits ranging from the Early Stone Age to the present day. Its is exhibited in 3 main sections-prehistoric and old stone-age, young stone-age, bronze-age and iron-age, and finally old Roman and middle-ages. It is especially reputed for its rich collection of ancient Roman antiques, with a number of them found in this area and the museum itself is a monument to Roman architecture. Among its collection is the oldest preserved monument the Humac stone plate, featuring the oldest recorded evidence of the Croatian language a (mixture of ancient glagolitic alphabet and croatian cyrillic) from this area of BIH. Included among its exhibits are several coin collections, stone monuments, sacred, historical and ethnic collections and antique monuments and a gallery. The oldest recorded exhibit is a paleolithic (old stone- age) necklace, and items from the Bronze-Copper era 3000-800 years BC

Art gallery - Mother
The art gallery boasts 250 works of art of which 140 of them are skulptures made form varying materials, and the remaining paintings and sketches. The collection features 40 skulptors, and 20 artists from Croatia and Bosnia and Hercegovina, 2 skulptors from Slovenia, and a few artists from Congo. The whole collection assembles under the name of MOTHER , an interesting conception, to all a popular theme and an ever-ending inspiration to artists down through the ages. ... 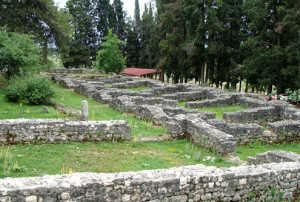 Remains of a surburban roman villa from the beginning of the IV century, and also within the grounds, the remains from a I century dwelling and its outbuildings, among which it is maintained include an old bakery, a mill and a blacksmith. Within the grounds is the living proof that even back in those ancient times, the Romans knew to reap the benefits of our fertile terrain and grow the precious olive tree, with the discovery of the remains of an underground storage, where it is maintained they stored olive oil. Since then the olive tree and the vine cultivation go hand in hand as a significant part of the agricultural life in BIH.With the invasion of the Goths came the destruction of the villa and survivors of that era were unable to restore the grounds to its former splendour, but regardless whatever remains of the vila and its surrounding dwellings will steal the breath of any discerning tourist. 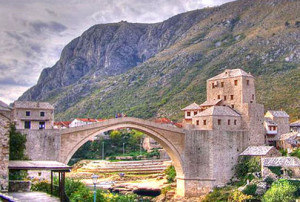 We can assist you also with a day trip to the nearest city of Mostar, the commercial and cultural town center of southern Hercegovina. Situated 60 m above sea level between the mountains of Čabile, Čvrsnice, Prenja, Veleža and Hum. Mostar appears in historical records as far back as the XV century. It is world famous for its Stari Most (Old bridge), built in 1566, and symbolically connected the east and west sections of Hercegovina. Mostar has joined the official UNESCO list of world heritage sites in the year 2005. 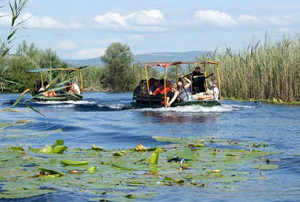 This most frequented spot for nature lovers was developed in 1995. Located only 22 kilometers from Medjugorje in south east Hercegovina, on the left side of the Neretva river, in the district of Čapljina and Stolac. Consisting of an area of some 7411 hectors Hutovo Blato is considered one of Europes finest bird sanctuary.

In fact in 1998 the ICBP(International Community for Bird Protection) added Hutova Blato to the list of international sanctuaries. Also in the year 2001 Hutova Blato was enrolled with UNESCO as being of international importance and registered as a swamp adhering to the standards set by the Ramsark Convention for wildlife protection.... 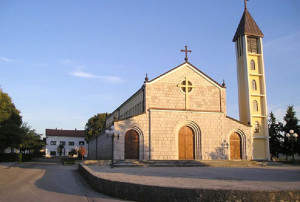 A day trip to the monastery and church in Tihaljina is also a popular excursion. The parish formed in 1889 when it seperated from the parish of Ružica. The parish house was also completed in 1889, and recently renovated.The chapel was for a long time located in the parish house, (from 1889) and from the house was built a wooden bell tower. However the building of the actual church began before the outbreak of World War II, ceased for the period of the war and continued around the 1960s and completed some years later. The parish priest Fr.Jozo Zovko 1985-1991 renovated the parish house and the church, and instead of the old parish house is a new home for nuns, and the grounds of the church have also been attractively reclaimed. In 2002 the number of parishioners were 1,250. 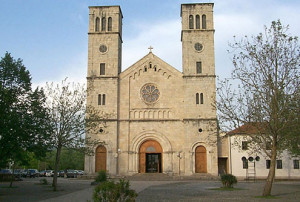 Located in southern BIH 30 km from Medjugorje, and built on the river Lištic, its main attraction is the Franciscan monastery and church, consecrated to the Blessed Virgin Mary. Alonside the monastery on the 25 July 1990, was opened the permanent Franciscan Gallery of Široki Brijeg. On permanent display are works by mostly Croatian skulptors and artists of modern and contemporary art, both by professionals and amateurs. It should be mentioned that there is also numerous archaeological findings on display, the most significant being the prehistorical mass remains of the ancient town Mokristika, the remains of the middleaged town, of Široki Brijeg, featuring the oldest known church remains in this area, and probably in the whole of BIH. Raised in the 4th or 5th century in Mokrom, a confirmed town that the tzar Constantine called Mokristik, it reflects the early habitations of those ancient times. 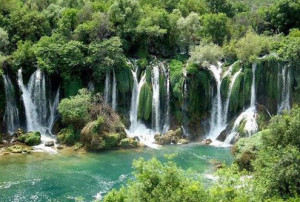 One of the most attractive destination for tourists and pilgrims who have decided to take some time out to view the nearest beauty spots. Located only 15 kilometers from Medjugorje, on the river Trebižat, and only a few kilometers from the town of Ljubuški it is created from the full rock flow of the river. It is a most beautiful and natural phenonema under state protection as a geological tribute to nature. The height of the fall is estimated at approx 26-28 meters falling dramatically to a bowl spreading to a radius of maybe 120m. Because of this it has become a popular local swimming spot and with its green and fertile surroundings, a heavenly setting for relaxing meal out offering beautiful picnic spots and pleasant restaurants. During the summer when the water vaporizes and rises high above the falls with its emerald green waters flowing along its fertile banks, where flowers and trees bloom alongside its limstone enriched rocks rising from surprisingly soft and sandy grounds, there is no cooler or more beautiful place in Hercegovina. 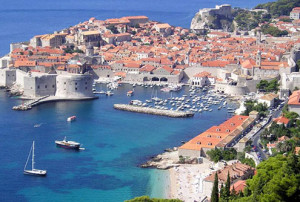 Dubrovnik is situated in Southern Dalmacia,the most beautiful part of Adriatic coast.Rich vegetation,beautiful lakes,rare islands,white pebble beaches and crystal sea,all make this region to an unforgettable experience for every visitor. Dubrovnik Region consists of numerous small „jewels“ that are worth visiting,small authentic villages,untouched islands and,of course,the Old Town of Dubrovnik, the crown jewel of them all. The city is situated 130 kilometers southeast of Medjugorje and is under UNESCO protection.. 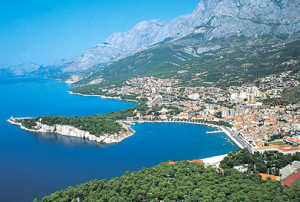 Makarska is situated in the centre of Dalmatia and is the heart of the Makarska Riviera. It comprises of two parts,the old Mediterranean town and the new town where you'll find modern hotels and apartments as well as sporting and shopping centres. The town has grown and expanded around a natural port between the Saint Peter Penisula amd the Osejava Cape, it's precisely in that region of the Adriatic that the waves of the sea have created some of the most beautiful Croatian beaches.Makarska is one of the most well known Croatian tourist destinations, they all come here for its stunning beauty and unspoiled nature as well as all other things it has to offer. 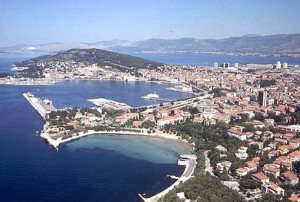 Split is located 150 kilometers south of Međugorje.This for ever young city with the population of about 200,000 that give its warm Mediterranean temper, has lived its urban rytham for as long as 1700 years, with its heart in the Diocletian Palace and its soul widespread to embrace you.